Do Your Shopping on the Subway

So I was watching the news and I saw the most amazing but simple, marketing strategy. But before I start, I am going to give you a little bit of background first.

This all takes place within a company called Tesco. They have recently opened several stores in South Korea and have been adapting to the Korean culture, they even changed their name to Homeplus (just like when they came to the US changing their name to Fresh and Easy). They have made a significant impact on the Korean market, but their goal was not only to adapt to the Korean culture, but they wanted to become the number one grocery store in Korea. However, there was one thing stopping them, they did not want to open as many stores as their competitor E-Mart and compete directly with them. So Tesco’s decision to restructure the way the Korean public shopped to see if they could revolutionize the countries shopping patterns.

They started out putting exact replicas of their store shelves in subways in the form of an Ad like the picture below.

So you’re probably asking what is so appealing about these pictures or why would Tesco put pictures of their isles on the wall, why not have pictures of fresh delicious-looking food? Well, let me premise the reason by informing you that Koreans are considered the second hardest working nation in the world, and they find going grocery shopping a waste of time. These Ads are not just Ads they are an actual grocery aisle.  Yes, Koreans that take the Subway can walk down the aisle or hallway at a Subway station while waiting for a train and do their shopping. All they have to do is locate the QR code underneath the item they want to purchase, scan it with their smartphone and pay for it using their phone as well. Tesco is then notified of the purchase and the grocery items are packaged and sent directly to the customer’s home. A large number of Koreans have already adapted to this way of grocery shopping. Tesco is not taking over Korea by implementing better POS systems, better customer loyalty programs, better cashiers, or baggers. Rather they are taking over Korea with big sheets of paper, glue, and strategically located warehouses. 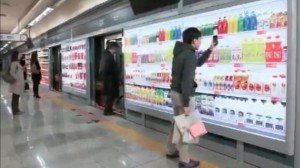 I assume you’re thinking that Tesco is the number one market in the South-Korea because of this new marketing strategy. Well, you’re half right, Tesco has become the number one on the online market but remains number two on the offline market. So although they have not technically beat E-Mart, they have met their goal in many aspects.

I believe that this was an amazing strategy because I agree with the Korean public, going grocery store shopping can be a hassle. And although the United States has online grocery shopping, I still believe that it is a hassle because you have to log on to the computer and look for your items. Whereas Tesco gives you a replica of the store, so you already know where the items are and it is conveniently positioned in a spot where people will have to come across it.