Kiosks are coming to a grocery store near you, but it might not be what you’re thinking. Nevada has declared that they are going to commit to a 10-year 27.6 million dollar contract to install DMV kiosks in different grocery stores throughout the state. Nevada residents will be able to renew car registrations, extend driver’s licenses, and do other tasks that would require a trip to their local DMV office.

The DMV chief, Bruce Breslow, explains why Nevada is adding DMV kiosks to their grocery stores. The main purpose is because the DMV closes at 5 pm and the grocery kiosks will be open 24 hours a day. Also, Mr. Breslow explains that not everyone lives down the street from DMV so instead of spending the gas and time to go to your local DMV you could easily go to your local grocery store to fulfill your DMV duties. There is a small catch though, people that use these kiosks will be charged a fee:

Although these fees are the bad part of this deal, it is a small price to pay because I would much rather spend a dollar than have to spend an entire day in a DMV line.

Nevada plans to add 40 kiosks to grocery stores around the state that usually have long wait times in the DMV. And they plan on adding more kiosks once the demand for them increases.

So I know that this did not have anything having to do with groceries or new grocery technology but it is really interesting how they decided to put these kiosks in grocery stores. I believe that this gives Nevada grocery stores a good chance to increase their sales and promote their stores. I mean can you imagine if ¼ of the people that wait in DMV lines with you were to wait at a grocery store and then be like, “Hey, I should get some milk” after their DMV transaction. I mean I became a victim of the grocery store Red Box combo because ever since my local market brought a Red Box into its store it has become much easier for me to buy snacks with my movie rental.

So tell me what do you think about this new DMV Kiosk, would you want one in your grocery store? Leave comments below 🙂 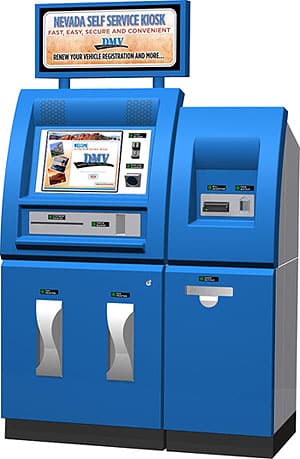