During this economic crisis many people are suffering, whether it’s that they were laid off, they are losing their house or maybe even both. We can all agree that times are hard right now. And due to the current economic crisis, theft has begun to increase. USA Today has reported that:

On the plus side, The New York Times has reported that even throughout the recession, violent crimes have decreased by 21 percent.

But a grocery store, Safeway, in Grand Junction, Colorado has found a way to stop local grocery theft. Safeway reports that people will go into their grocery store, fill up their grocery carts and then leave without paying. And all through Safeway employees understand that people’s current economic conditions are hard, they cannot allow people to continue walking into the stores and leaving with hundreds of dollars worth of groceries.

So Safeway has installed security systems on their grocery carts that prevent people from leaving the store without paying. This security system is not new technology, many of you have probably already seen it. Many big chain stores such as Wal-Mart, Target, Food-4-Less, and Vons already have this security system installed on their carts. It prevents people from walking away with the company’s carts, so when a person pushes a cart past a certain distance of the store one of the wheels will lock and prevent the person from pushing the cart further. 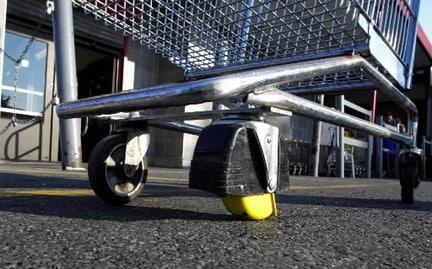