I know I’ve talked a lot about new grocery technology that helps customers get in and out of the store as soon as possible. But it amazes me how our new day today technology has been incorporated into grocery stores.

This Chinese grocery store, Shanghai Lotus Supermarket, has agreed with SK Telecom to launch a pilot program with tablets put on their grocery carts. This experiment is nothing that we haven’t seen before, it was designed for grocers to go into the store to buy their groceries, be automatically offered coupons and their total amount will be shown on their tablet. However, there were some features that I thought were pretty interesting.

For instance, the tablets are networked through the store’s wi-fi, and all people have to do is download the “Smart Cart” phone application and sync it with the tablet so the list of groceries, that were written down at home, will appear on the screen.

Another feature of this tablet is that it shows the customer a map of the store while they are walking around. So not only do they know where they are at all times but it also shows the grocer the items that were on their list.

So overall I believe that this new product created by SK Telecom is not new and not incredibly unique. But I do like the fact that grocery stores around the world are beginning to welcome the 21 century into their stores because adding new technology will not only help the customer to do their grocery shopping quicker but it will also make a happier grocer. Which is what we all want. 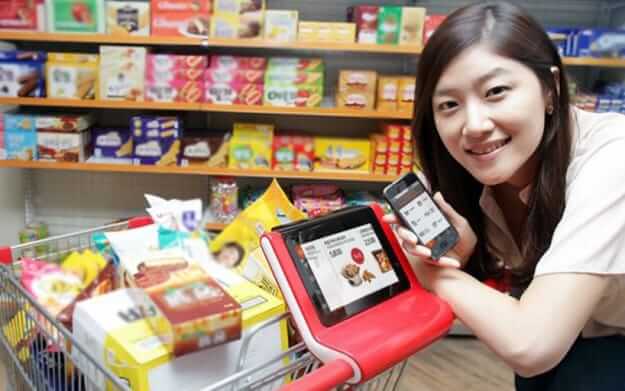